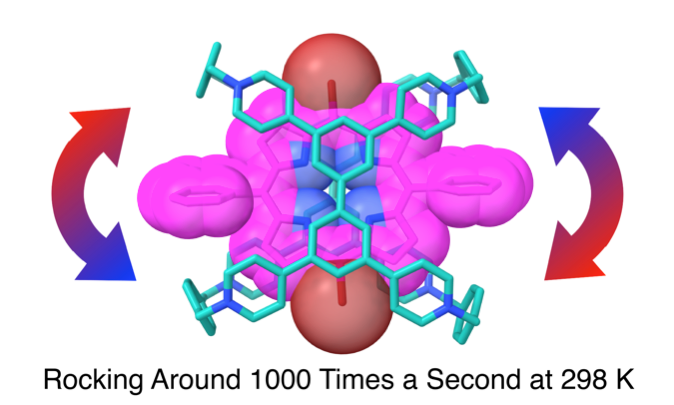 Suitanes are two-component mechanically interlocked molecules in which one (torso) of the components, with several protruding limbs, is encompassed by another (suit) all-in-one component. We have reported a suit[4]ane, wherein a porphyrin with its four protruding limbs, encompassed by a tricyclic cyclophane, rocks back and forth inside the cyclophane. 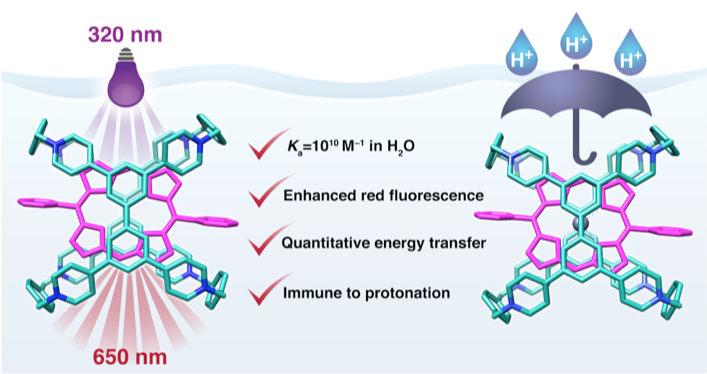 The encapsulation of free-base and zinc porphyrins by a tricyclic cyclophane receptor, XCage, is sustained by subnanomolar binding affinities in water. The resulting complexes demonstrate emergent photophysical enhancements and enjoy unprecedented chemical stabilities, where their D/H exchange, protonation, and solvolysis, under extremely acidic conditions, are completely blocked. 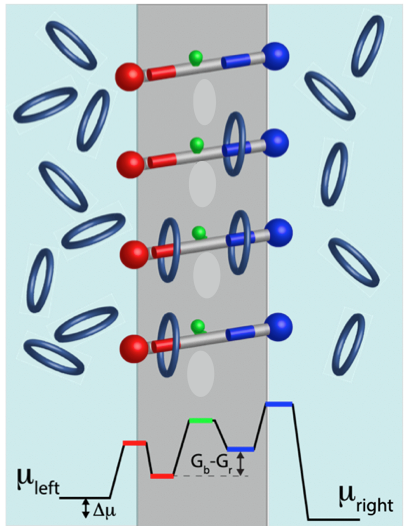 Non-equilibrium kinetics and thermodynamics associated with transporters and pumps featuring different design principles — i.e., energy and information ratchet mechanisms have been summarized. The limitation of stochastic thermodynamics for catalytic processes has been discussed. 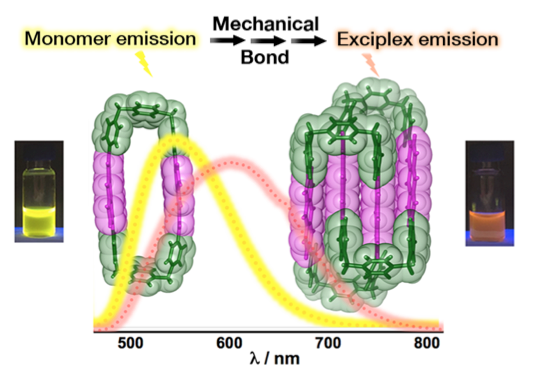 Our approach to obtaining permanent exciplex photoluminescence begins with the incorporation of anthracene moieties into pyridinium-containing mechanically interlocked molecules (MIMs). The difference in the optical properties of the anthracene-based cyclophanes and the precursor homo[2]catenane are consistent with the role of the mechanical bond in the emergence of the low energy exciplex emission in the catenane. 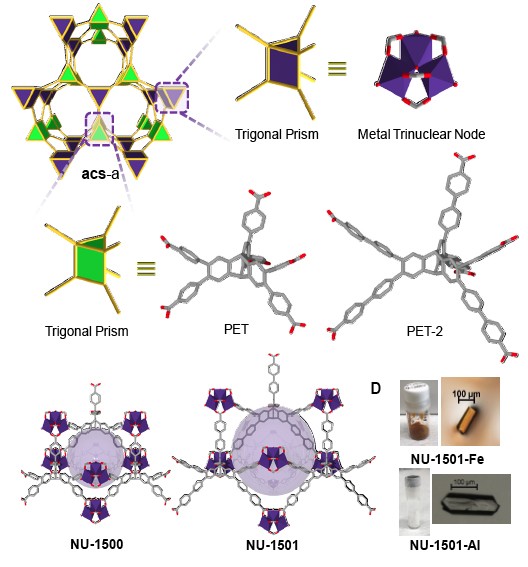 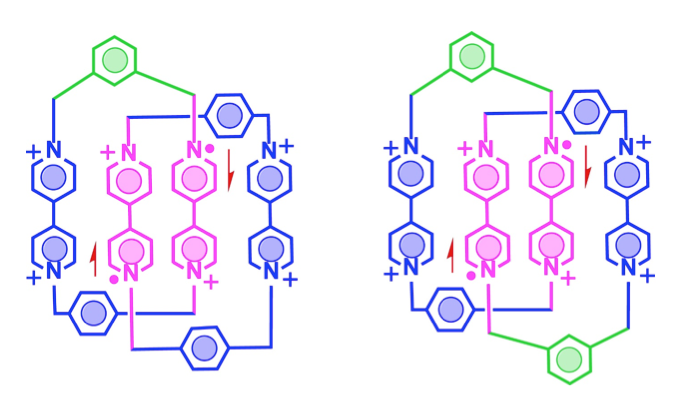 Two new highly charged [2]catenanes have been synthesized and isolated as air-stable singlet bisradicals displaying mixed-valency and multiple redox-states thanks to the unique nano-confinement induced by mechanical bonds in these catenanes. 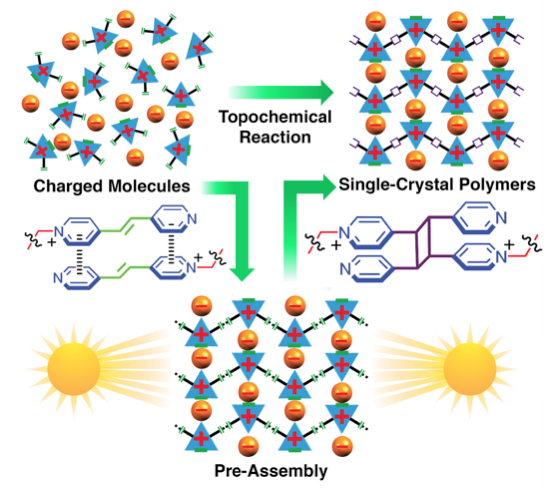 A new principle has been established for preparing single-crystal polycationic polymers utilizing an ultraviolet/sunlight-induced single-crystal-to-single-crystal photopolymerization on a gram-scale in quantitative yield from tricationic monomers possessing self-complementary building blocks. 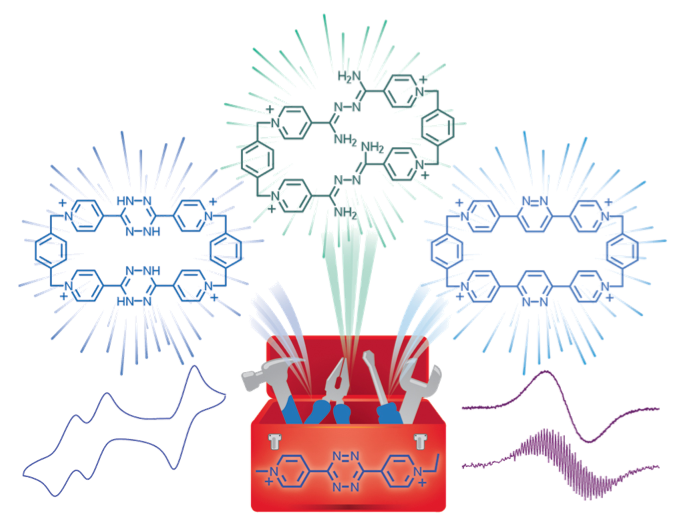 We have made a TetrazineBox, which serves as a toolbox for probing the radical properties and generating efficiently a range of structurally diverse cyclophanes by box-to-box cascade transformations, taking advantage of either reductions or an inverse electron-demand Diels-Alder reaction.

Intramolecular circuits are built with two-channel charged cyclophanes. An interchannel gating effect and constructive quantum interference act synergistically, leading to a conductance that is 50-fold higher than that of a single-channel control, breaking the single-molecule superposition law. 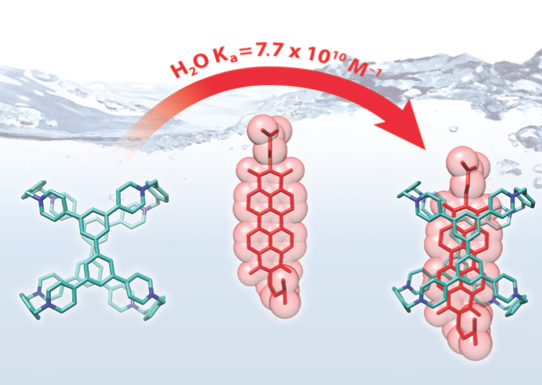 A new tricyclic octacationic cyclophane, XCage, which has a stereoelectronic complementarity towards perylene diimide and shows a picomolar binding affinity in water, has been designed and synthesized.

A two-dimensional (2D) conductive metal-organic framework (MOF) with large one-dimensional channels has been developed as a zinc battery cathode. Owing to its unique structure, hydrated Zn2+ ions which are inserted directly into the host structure, Cu3(HHTP)2, allow high-rate performance. 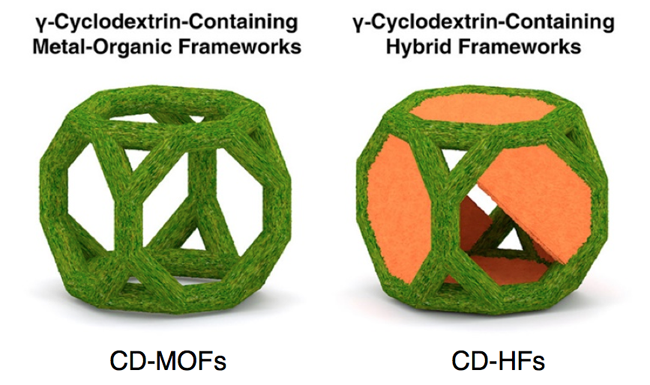 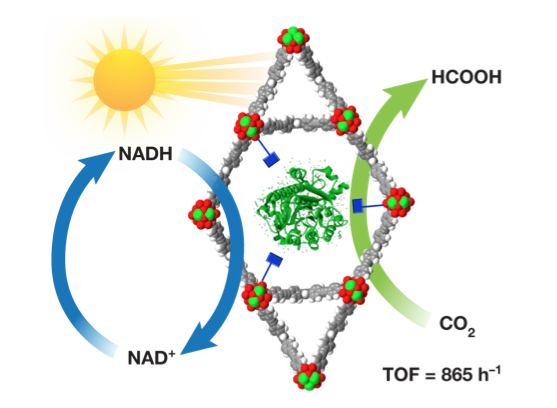 The structure-property relationships between cavity sizes and binding affinities for radical-pairing interactions have been investigated using a series of bisradical dicationic cyclophanes (purple) with different linker units (Ar1 and Ar2 / light pink) to modulate their cavity sizes. 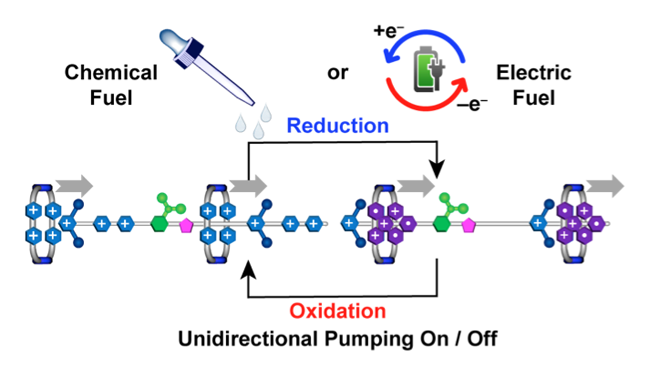 A molecular dual pump, which consists of two individual pumps linked in a head-to-tail fashion, has been designed and synthesized for the controlled capture and release of a ring via a [2]rotaxane intermediate.

A redox-active triangular phenanthrenequinone-based macrocycle (PQ-Δ) with a rigid geometry has been developed as a zinc battery cathode. The macrocyclic nature of the PQ-Δ cathode provides a dramatically increased capacity and cyclability compared to that of traditional organic materials. 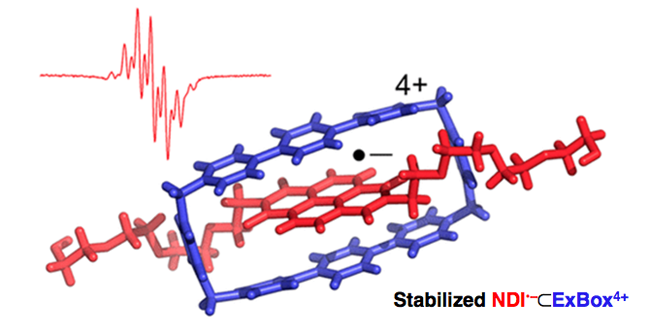 A new strategy has been presented which stabilizes the NDI•– radical anion and modulates its redox properties, by host-guest encapsulation and/or mechanical interlocking with a tetracationic cyclophane, namely, ExBox4+.

Artificial allomelanin nanoparticles (AMNPs), analogous to one type of melanin produced by radiation-resistant fungi, have been prepared with well-defined nanostructures. They can be taken up by human epidermal keratinocytes and act as radical scavengers. 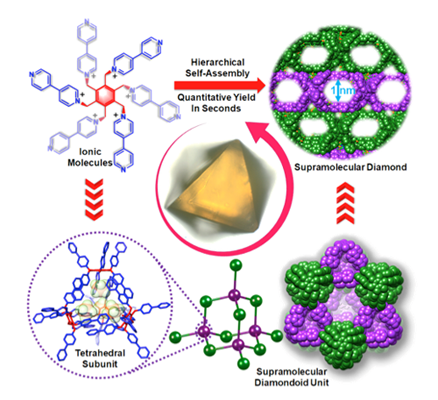 A unique approach has been established for constructing supramolecular diamond crystals with nanoporous diamondoid superstructures and octahedral shapes, resulting from the hierarchical self-assembly of preorganized hexa-charged molecules quantitatively within seconds under ambient conditions. 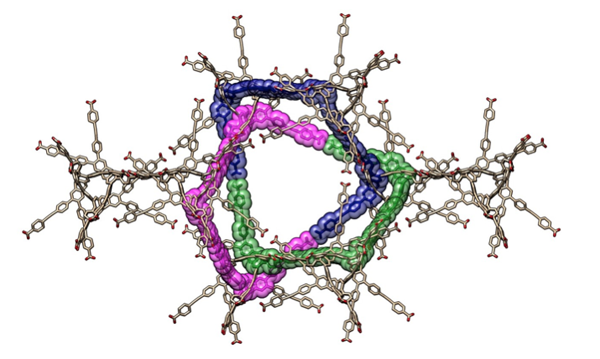 Redox-active and shape-persistent cyclophanes, namely CTPQT6+ and MCTPQT6+, which are the homologous tricyclic derivatives of the trademark Blue Box from our group, have been synthesized. These derivatives adopt triangular conformations and the 3D packing of MCTPQT6+ results in nanometer-sized channels in the solid state. 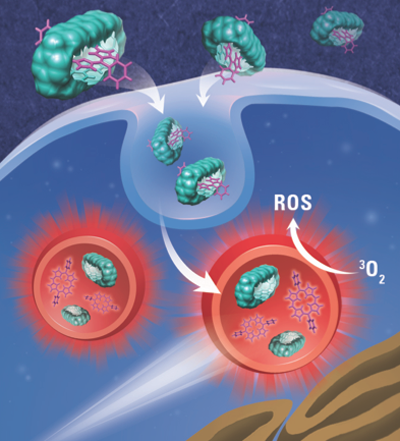 A multifunctional synthetic receptor ExBox4+ has been employed to achieve supramolecular photoprotection, lysosomal delivery, and pH-triggered release of a photosensitizer. The use of the ExBox4+ -bound photosensitizer in anticancer treatment using regulated photodynamic therapy is described. 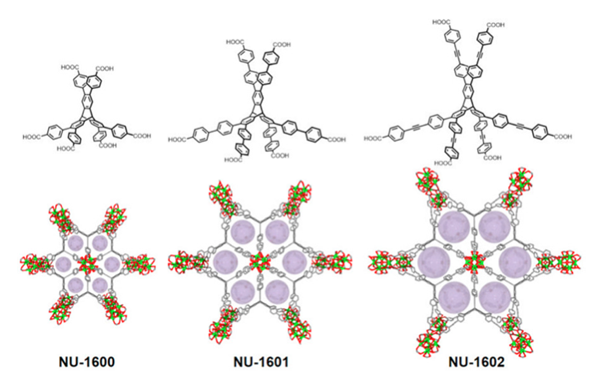 A series of zirconium-based metal-organic frameworks (Zr-MOFs), i.e. NU160X, with the edge-transitive alb net, was synthesized reticularly from 12-connected hexagonal Zr6 nodes and 6-connected trigonal-prismatic triptycene linkers. These Zr-MOFs exhibit remarkable activities toward the destruction of a nerve agent (Soman) and a nerve agent simulant. 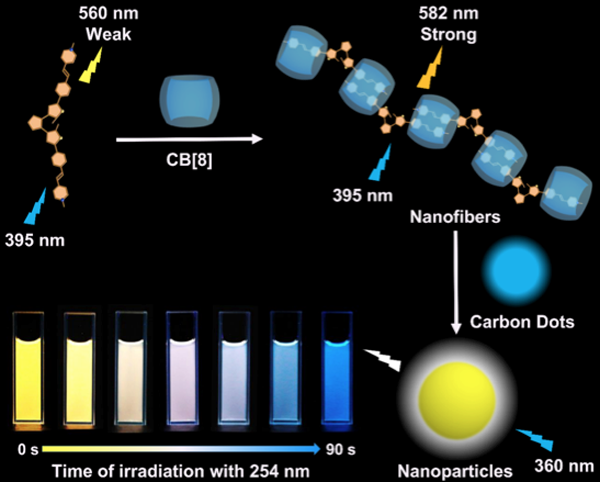 A photoluminescent supramolecular assembly, the fluorescence of which can be changed efficiently from yellow to blue in an in situ photo-controlled manner, has been prepared in two stages. Employing this assembly, white light emission can be realized expeditiously by a luminescence color-conversion process.

A series of non-catenated metal-organic frameworks based on the acs net (acs-MOFs), i.e. NU-1500, was synthesized from trivalent trinuclear metal (Fe3+, Cr3+ and Sc3+) clusters and 6-connected trigonal-prismatic linkers. The highly porous and hydrolytically stable NU-1500-Cr can be activated directly from water and displays an impressive water vapor uptake with a trace of hysteresis. 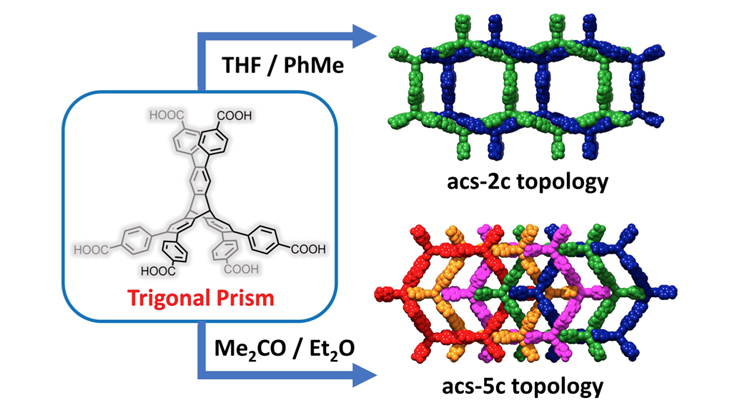 When a photo-switchable oligo(p-phenylenevinylene) bipyridinium unit (light pink) is incorporated into a tetracationic cyclophane (light blue), it confers upon the cyclophane the ability to direct reversible guest (red and pink) capture and release using thermal and photo stimuli.

A glowing tetracationic cyclophane (ExTzBox•4Cl) with unity quantum yield has been synthesized and utilized for live-cell imaging. This work, which describes the significance of using box-like cyclophanes for bioimaging, holds promise for the development of multimodal imaging platforms.