A research article entitled “Fluorescence Quenching by Redox Molecular Pumping” has been recently published in Journal of the American Chemical Society by Postdoctoral Fellows Xuesong Li and Arthur David.

Artificial molecular pumps (AMPs), inspired by the active cellular transport exhibited in biological systems, enable cargoes to undergo unidirectional motion, courtesy of molecular ratchet mechanisms in the presence of energy sources. In the past few years, making use of the alternatively radical interactions and Coulombic repulsive forces among 4,4-bipyridium (BIPY2+) units under the redox course, we have achieved meaningful progress towards creating working AMPs. In order to expand the range of these AMPs, we have explored the effect of molecular pumping on the photophysical properties of a [3]rotaxane. Modification of the luminescence properties of interlocked molecules as a result of mechanical bond formation has become a hot topic.

In an attempt to widen the horizon of applications for AMPs, we have reported the quenching of the fluorescence of a dumbbell-like molecule consisting of two redox pumping cassettes at their termini to aid and abet the pumping of two tetracationic cyclophanes, namely CBPQT4+. The dumbbell incorporates a fluorescent pyrene unit in the middle of an oligoethylene glycol chain. Upon reduction of the BIPY2+ dications to BIPY+• radical cations, pairing interactions between radicals drive the formation of trisradical tricationic complexes between CBPQT2(+•) and BIPY+•. Following the addition of Ag+ ions, BIPY+• is oxidized back to BIPY2+, restoring the Coulombic repulsion between the recognition sites and the rings, forcing them to move over the steric barriers so as to interact with pyrene. In essence, as a result of the pumping, which moves the system away from equilibrium, and the generation of mechanical bonds, the fluorescence of pyrene is quenched. It must be noted that this quenching does not occur upon mixing an excess of CBPQT4+ with compounds containing PYR units without the presence of mechanical bonds.

Pictured below – Xuesong Li and Arthur David with the TOC for their publication: 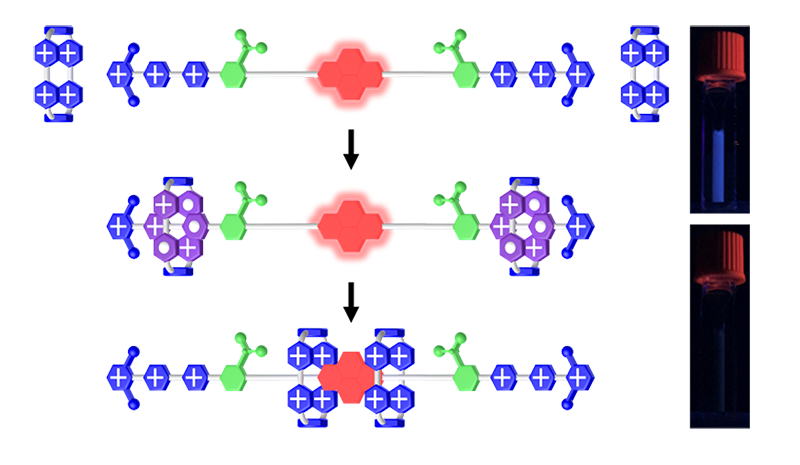