Chandra Sourabh Azad was born and raised in Uttar Pradesh, India. Following his graduation from Hindu College Moradabad he earned a gold medal for his master’s degree in organic chemistry from the Mahatma Jyotiba Phule (MJP) Rohilkhand University. He completed his PhD at the Council of Scientific and Industrial Research (CSIR) Central Drug Research Institute and later joined Professor Mark Olson’s research group as Postdoctoral Fellow at Tianjin University after completing his first Postdoctoral Fellowship at Guru Gobind Singh Indraprastha University. Upon joining the Stoddart Group Chandra will focus on the synthesis and fluorescence characteristics of supramolecular self-assemblies and molecular machines.

Han Han was born and grew up in Jiangsu Province, China. He obtained his BS degree in Polymer Materials and Engineering from Soochow University and later obtained his PhD in Applied Chemistry from Peking University. In March 2021 Han moved to Nankai University as a Postdoctoral Fellow with Assistant Professor Kang Cai, working on developing deep-cavity macrocycle receptors toward biomedical applications. As a new Postdoctoral Fellow in the Stoddart group, Han’s current research interests will focus on the rational design, synthesis and applications of molecular machines and radical cages.

Chun Tang was born and grew up in Xinjiang, the largest province in Northwestern China. He received his BS degree and PhD in physical chemistry from Xiamen University. During his PhD Chun used the single-molecule technique to study aromatic chemistry and explore the effect of orientated external electric fields for electrostatic catalysis. Later, he spent one year as a Research Assistant at the Southern University of Science and Technology (SUSTech) in Shenzhen. Now a Postdoctoral Fellow in the Stoddart Group, Chen’s research involves the development of molecular machines for electrostatic catalysis as well as the design of single-molecule electronic devices based on supramolecular chemistry.

Tanay Kesharwani is currently an Associate Professor of Chemistry at the University of West Florida. He received his undergraduate degree in chemistry from the Indian Institute of Technology and later completed his PhD in organic chemistry at Iowa State University. After spending two years at a biotech company his keen interest in academia motivated him to join Northwestern University for postdoctoral studies with Professors Joe Hupp and SonhBin Nguyen. After spending two years as a visiting faculty member at Bard College he began his independent career in 2013 at the University of West Florida. His research interests include the development of new and greener synthetic methods and their applications toward the synthesis of small molecules of materials and biological interest. During his time as a Visiting Scholar in the Stoddart Group Tanay’s research interests will include the design, synthesis, and characterization of mechanically interlocked molecules and dynamic molecular machines.

We are very happy to have you all on board and look forward to the wonderful research you will all undoubtedly perform! 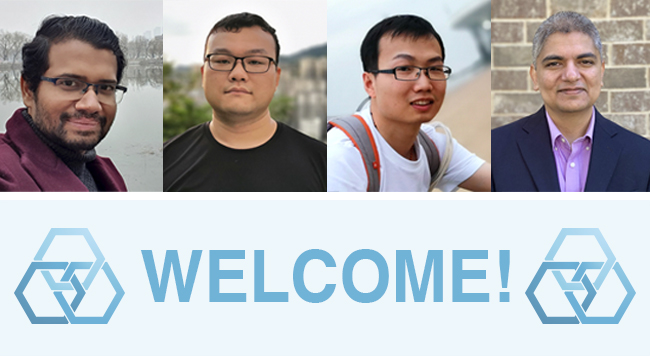