Each year the Stoddart Group votes for their fellow members to receive awards in three categories: Group Meeting Winner, Best Publication, and Good Samaritan which are then presented to the winners at an end-of-year group event.

This year the recipients of the awards were: dual Group Meeting winners Lorenzo Mosca and Baillie DeHaven, Best Publication winner Qing-Hui Guo, and Good Samaritan Lorenzo Mosca. All three were presented custom certificates by Fraser at a group luncheon held on January 27, 2020.

The Group Meeting Award winners are chosen unanimously each semester by the entire Stoddart Group based on their presentations of recent research describing concepts and applications outside of the group’s direct focus. Each week different group present research papers of their choosing to the rest of the group, and are then voted on based on the quality of background research, quality of presentation, and quality of critical analysis. The voting follows a tournament-style process and eventually the final winners are chosen among a group of three finalists. This year two winners emerged: Postdocs Lorenzo Mosca and Baillie DeHaven.

The Best Publication Award goes to a unanimously chosen group member who is the first author of a significant publication that represents a breakthrough in Stoddart Group research and appears in a high profile journal. This year’s Best Publication went to Postdoc Qing-Hui Guo’s paper titled A hierachical nanoporous diamondoid superstructure appearing in Chem volume 5, issue 9.

The Good Samaritan award is presented to the group member that goes above and beyond in contributing their time and effort into supporting the daily operation and overall success of the Stoddart Group. This individual engages in assisting group members and administration in areas of safety, organization, and operation among others. This year’s winner was Postdoc Lorenzo Mosca.

Congratulations to the winners of the 2019 Stoddart Group Awards! 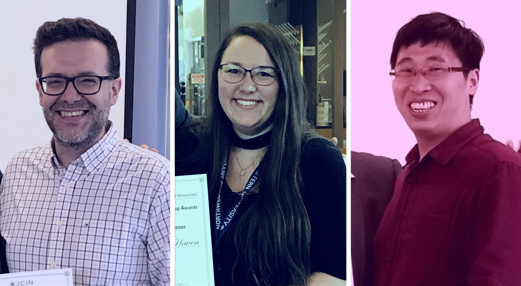