An Invited Perspective by Yang Jiao Published in Tetrahedron

Electron transfer is a fundamental chemical process that adds an electron into one chemical entity and generates a hole in another. Both the additional electron and the corresponding hole exhibit remarkable catalytic effects in promoting chemical transformations. Over the past few decades, with the renaissance in radical chemistry, as well as the advent of radical-mediated electrosynthesis and photoredox catalysis, the paradigm of “the electron is a catalyst” has been widely applied either intentionally or unintentionally, resulting in the emergence of numerous electron / hole-catalyzed reactions.

In this Perspective, by classifying the approaches of electron transfer into four categories—namely, chemical, electrochemical, photochemical and mechanochemical means—we have summarized the state-of-the-art protocols of electron / hole catalysis, focusing on the elegant ways that have been developed to inject or remove electrons into or from reaction systems under mild conditions. Moreover, recent advances in research involving the applications of electron / hole catalysis in molecular switches and supramolecular assemblies have also been highlighted in order to show the versatility and potential of this strategy in all aspects of contemporary chemistry including, but not limited to, organic synthesis. In the outlook, we have, not only commented on the significance of mechanistic investigations in the optimization of existing synthetic methods as well as the invention of new catalytic strategies, but also raised more possibilities of electron / hole catalysis occurring in biological environments and condensed phases.

This Perspective, prepared collaboratively by Yang Jiao and Fraser Stoddart, is dedicated to the 65th anniversary of Tetrahedron, a classical journal in organic chemistry. Congratulations Yang. A nice and timely Perspective!

Pictured below — A photo of Fraser and Yang, as well as the TOC of their Perspective in Tetrahedron: 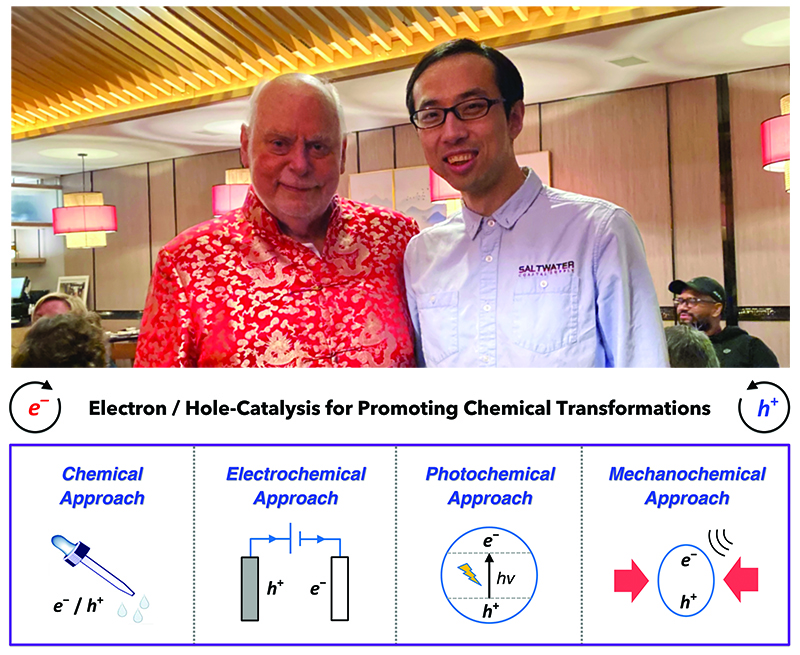