Postdoctoral Fellow Huang Wu has been selected as the winner of PAPER OF THE YEAR AWARD for his contribution on “Selective Separation of Hexachloroplatinate(IV) Dianions Based on Exo-Binding with Cucurbit[6]uril”, identified as one of the most intellectually innovative publications with the greatest promise for the future by the Center for Sustainable Separations of Metals (CSSM).

CSSM is a National Science Foundation (NSF) Center for Chemical Innovation (CCI), whose aim is the discovery of new fundamental chemical separation methods to recycle valuable metals from consumer products, and promote the growth of new businesses, reduce the pollution caused by mining, as well as eliminate the potential resource conflicts. CSSM’s PAPER OF THE YEAR AWARD is recognition for outstanding research carried out by young scientists in metal separations. Huang received the award for his contributions to the development of a novel supramolecular metallurgical technology in platinum recovery.

Huang and collaborators demonstrated the instantaneous co-crystallization and concomitant co-precipitation between [PtCl6]2− dianions and cucurbit[6]uril, which relies on the selective recognition of [PtCl6]2− as a result of outer surface interactions with cucurbit[6]uril. This research not only expands the scope of the second-sphere coordination of metal complexes on the part of cucurbituril, but also casts more light on the outer surface interactions by macrocycles. Additionally, cucurbit[6]uril is able to extract selectively [PtCl6]2− dianions from a mixture of [PtCl6]2−, [PdCl4]2− and [RhCl6]3− anions. This eco-friendly supramolecular metallurgical technology shows potential for applications in recovering platinum from the spent vehicular three-way catalytic converters, as well as other platinum-bearing metal waste in real life.

Pictured below — CSSM Paper of the Year Award winner Huang Wu, the CSSM logo, and the Table of Contents graphic of the paper: 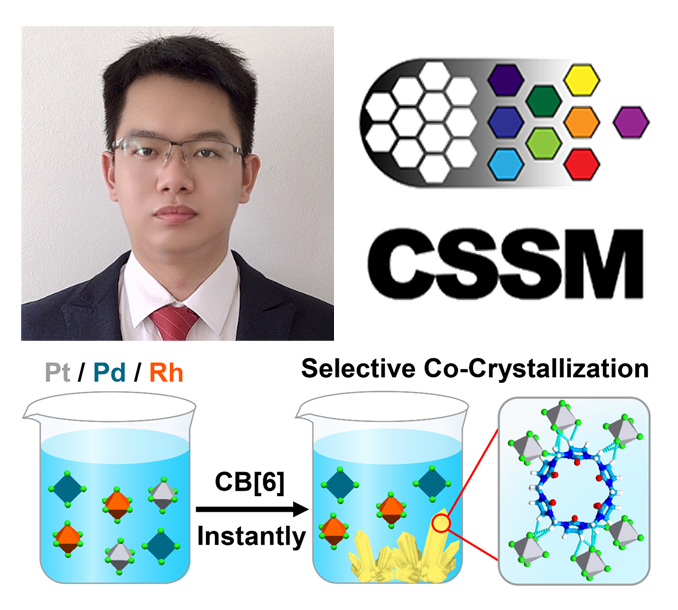