For the first time, electrons can be used to promote Molecular Recognition and Host–Guest Complexation processes! The collaborative efforts of Postdoctoral Fellow Yang Jiao and Research Assistant Professor Yunyan Qiu, as well as our in-house Spectroscopist Michael R. Wasielewski, the Molecular-Machine Theorist R. Dean Astumian from the University of Maine and William A. Goddard III from the California Institute of Technology, have led to a research article being published on 9 March 2022. See Publication #1248 / Nature 2022, 603, 265–270.

This piece of research represents a major breakthrough in both Supramolecular Chemistry and Catalytic Science. Catalysis has been widely applied to promote the formation of covalent bonds in chemical reactions. The catalysis of Molecular Recognition and Assembly processes, however, is extremely rare and the few examples rely heavily on sophisticated catalyst design. In this Nature article, we establish a simple and versatile strategy to facilitate Molecular Recognition by extending the concept of electron catalysis, which is widely applied in synthetic covalent chemistry, into the realm of noncovalent chemistry. The formation of a host–guest complex is accelerated 640-fold by introducing 4 mol% of electrons. The electron lowers the activation barrier for this process by decreasing  Coulombic repulsion between different components. In addition to its simplicity, the advantages of the electron catalysis approach are obvious. On the one hand, the method is not limited to a specific reducing agent: it can be carried out with a variety of different reagents. On the other hand, electrochemical reduction can, not only eliminate the need for reagents altogether, but also provide the ability to control the concentration distribution of the components in the solution over time. This fundamentally new type of catalysis will inspire chemists and biologists to explore strategies that can be used to fine-tune noncovalent events, control assembly at different length scales, and ultimately create new forms of complex matter.

Pictured below – Yunyan and Yang with Fraser; TOC of Electron Catalysis: 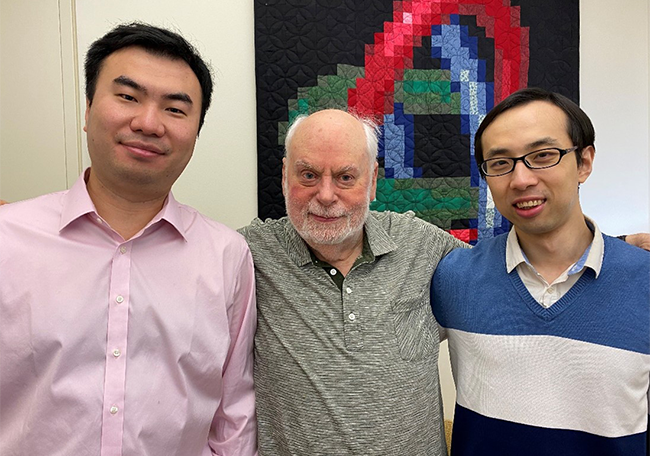 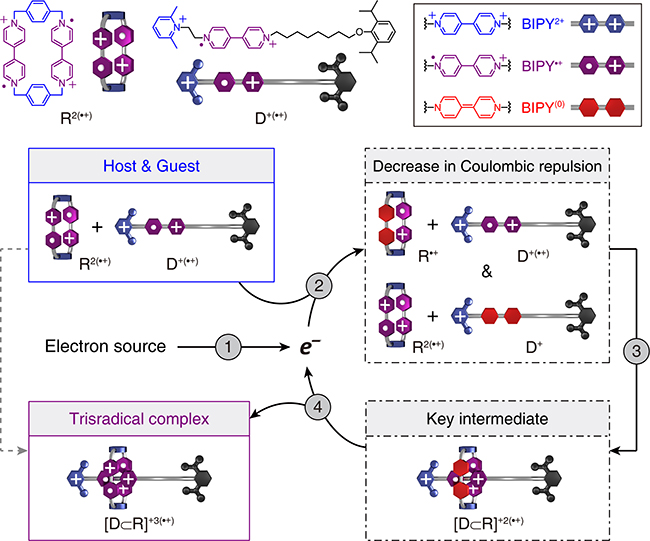