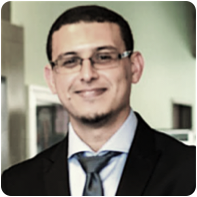 Amine grew up by the Mediterranean Sea, in Tunisia, where he got his engineering degree in chemistry. After an MS and an internship in France, he moved to Switzerland as a Swiss Confederation Fellow. There, he obtained his PhD in supramolecular chemistry at the University of Neuchâtel, under the supervision of Professor Bruno Therrien. In January 2016, he joined the group of professor Hanadi Sleiman at McGill University (Canada) as a Swiss National Science foundation postdoctoral fellow to work on DNA supramolecular chemistry. Since August 2017, he has been working as postdoctoral fellow in the Stoddart group at Northwestern university, discovering the amazing world of the molecular machine.