Since their foundation in 1951, the Lindau Nobel Laureate Meetings have developed into a unique international scientific forum. The annual Meetings provide an opportunity for an exchange between different generations, cultures, and disciplines. The theme of the Lindau Meetings alternates between the three Nobel Prize scientific disciplines, Physics, Chemistry or Physiology, and Medicine. Every five years an interdisciplinary Meeting takes place, while the Lindau Meeting on Economic Sciences is held every three years. Through the medium of various declarations (2020 for Open Science, 2015 on Climate Change, 1955 Against the Use of Nuclear Weapons) the scientists have repeatedly joined in the public debate with political appeals. It was the Lindau physicians Franz Karl Hein and Gustav Wilhelm Parade who approached Count Lennart Bernadotte af Wisborg with the idea of a conference of Nobel Laureates and proceeded to jointly implement this annual event with him – since 1953 with the participation of young scientists. Some 35,000 students, Ph.D. candidates, and Postdoctoral Researchers have since taken part. Their experience of the meeting may be literally once-in-a-lifetime, but they remain permanent members of the Lindau Alumni Network and ambassadors for scientific dialogue.

In addition, Liang was recently awarded the 2021 Mark Reed Young Researcher Award by the publisher of Nanotechnology for his important contribution in the field of surface chemistry which had led to the rational design of wholly synthetic life-like nanomaterials. This award is in honour of the late Professor Mark Reed, who was the Editor-in-Chief of the journal Nanotechnology (2009–2019) and founded the journal Nano Futures. The award recognizes early-career brilliance and is open to Ph.D. students and researchers within the first five years of completing their Ph.D. Liang will receive an official Mark Reed Young Researcher Award Certificate and has been invited to serve as an Editorial Board member for Nanotechnology, a historic journal publishing fundamentals of research including physics, chemistry, biology, and technology of nanometre-scale objects. 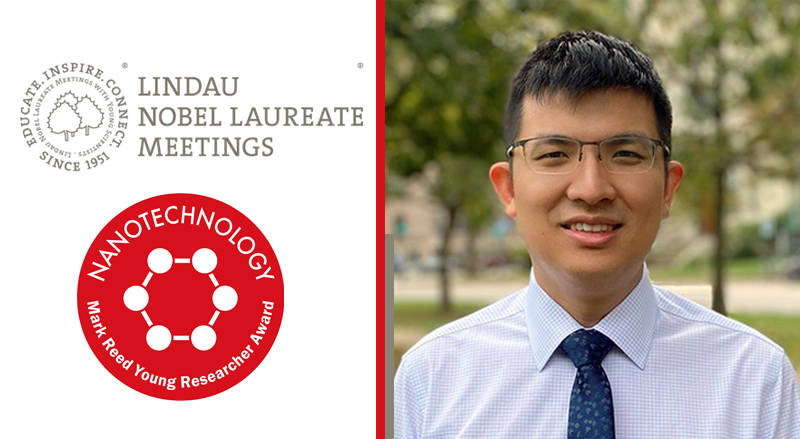