The long-standing challenge of establishing an active mode of adsorption in the past century has been cracked! The collaborative efforts of our Postdoctoral Fellows and Foresight Fellows Liang Feng and Yunyan Qiu, as well as the molecular-machine theorist R. Dean Astumian from the University of Maine, have led to a research article being first released on October 21st. See Publication #1243 / Science 2021, 374, 1215–1221 / News & Views in Nature Chemistry (DOI: 10.1038/s41557-021-00876-y) by Liang Zhang.

This research article describes the phenomenon of mechanisorption, which results from non-equilibrium pumping to form mechanical bonds between the adsorbent and the adsorbate. The phenomenon is associated with molecules that are transported actively to a surface compartment by using pumping cassettes and are retained in a highly non-equilibrium steady state indefinitely. These mechanisorbed molecules can be released into the bulk on demand by a non-destructive chemical process that involves only the breaking of noncovalent bonds. Unlike physisorption or chemisorption, this work shows that, when coupled with an energy source, the passive movement of adsorbates from regions of high to low concentration is reversed, giving rise to active adsorption by which adsorbate concentrations are maintained with large differences in chemical potential on surfaces and in bulk solution. Now, in addition to physisorption and chemisorption, a new concept—namely mechanisorption—is about to enter the lexicon of chemistry.

Pictured below—Graphic describing the process of establishing mechanisorption on surfaces: 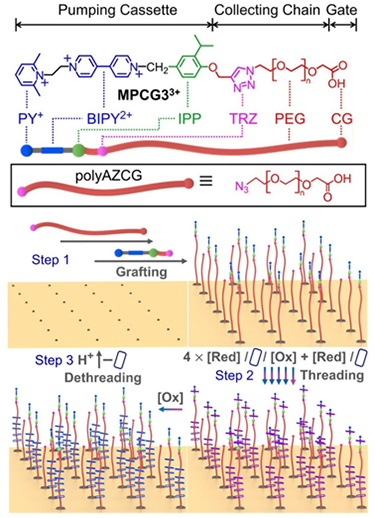