Douglas Philp Elected Fellow of the Royal Society of Edinburgh

Born out of the Scottish Enlightenment, the Royal Society of Edinburgh — Scotland’s National Academy— was established in 1783 for “the advancement of learning and useful knowledge”. The Society has just announced the election of 87 new Fellows from across the world of science, the arts, education, business, and public life. Among these newly elected Fellows is former Stoddart Group Member, Professor Douglas Philp.

Professor Philp was a  graduate student in the Stoddart Group first in Sheffield and then in Birmingham in the early 1990s. He has maintained links with the Group through a period of sabbatical leave at UCLA in 2006 and, most recently, as a Research Professor at Northwestern between 2018 and 2020.

The election of Douglas to a Fellowship of the Royal Society of Edinburgh recognizes his passion for tackling complex problems in science. Throughout his career, Philp has identified a big problem and pursued it with vigor, applying the widest range of experimental and computational methods to one of the most important questions in science— “what is the chemical origin of life?”. Central to this question is molecular replication. Douglas began his ground-breaking work on synthetic self-replicating systems during his tenure at the University of Birmingham. During this period, and later at the University St Andrews, he published seminal papers and reviews on molecular replication and brought this field to the attention of a wider scientific audience. His pioneering work in the design of synthetic replicators was recognized by the Royal Society of Chemistry through the Bader Award in 2009.

In the last decade, his laboratory has defined and established the emerging area of Systems Chemistry. During this period, he has described the ways in which individual synthetic replicators can be integrated into networks by making them interact and react with each other in programmed ways. These networks can be programmed and show different, but predictable, outputs based on their connectivity and inputs. This work has helped to define the boundaries of the emerging field of Systems Chemistry and, in doing so, he has brought the science of complexity firmly in the realm of simple chemical systems. The ensembles of replicators created in his laboratory capture the emergent phenomena found in biological networks, serving as functional models for some of the processes that may have operated on the early Earth. Careful design and structural simplicity permit deep insights into the operation of these networks using experimental methods. The concurrent use of computational methods allows the construction of models that allow the exploration of “what if?” questions that are grounded soundly in experimental data.

The many strands that characterize his approach to science are exemplified by two recent papers. The first one, published in late 2017 (J. Am. Chem. Soc. 2017, 139, 17565), describes a chemical network composed of four synthetic replicators, where the catalytic connections in the system program the ensemble to behave as a coherent unit rather than isolated entities. This paper showcases the high design principles that characterize his work and the rigorous execution of these goals through combination of synthetic, physical, and computational chemistry. The second paper, published in late 2019 (J. Am. Chem. Soc. 2019, 141, 13905), details an elegant experimental confirmation of a long-established prediction from computational biology—namely, that in a closed system, Darwinian selection cannot occur. This paper showcases the holistic approach employed in his laboratory—combining experiment and theory—to a critical hypothesis that spans scientific disciplines.

Professor Philp is a recognized world-leader in Systems Chemistry and has played a significant role in defining and promoting this emerging field, both in Europe and, more recently, in the USA. In the education sphere, he is recognized as a talented and innovative front-line teacher and administrator, having served as the Dean of the Faculty of Science at St Andrews.

Your becoming FRSE is extremely well earned and most welcome. Congratulations Douglas!

Pictured below – Douglas Philp alongside the Royal Society of Edinburgh logo: 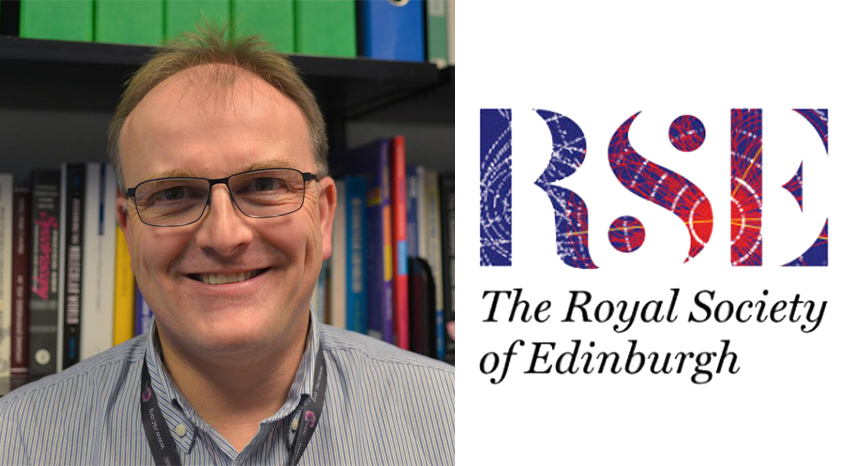