Confined nanospaces, which provide discrete physical and chemical environments that are different from those in the bulk solution, play an indispensable role in the expression of biological functions in enzyme catalysis, immune response and cargo transport. While in biology, microenvironment influences are vital for sustaining these complex life processes, in the molecular domain, the creation of confined nanospaces leads to emergent phenomena affecting ground and transition state properties, which define receptor-substrate binding in supramolecular systems and control catalysis in chemical reactions. The construction of artificial nanospaces employing molecular engineering has been a major focus of much research carried out in chemistry and materials science laboratories in recent times. Over the past decade, there has been a resurgence on the design and synthesis of molecular receptors with emergent binding cavities. As a result, new molecular containers, emerging from the fields of supramolecular chemistry and reticular chemistry, are pushing the frontiers of host-guest chemistry to new levels, demonstrating remarkable substrate affinities and selectivities. At the same time, the exploration of molecular containers has reached beyond host-guest systems. They have been recognized as new molecular materials capable of remarkable performance when it comes to storage, separation, stabilization and catalysis. With the goal of spotlighting the emergent properties of molecular containers housed in confined nanospaces, this Review includes examples of molecular containers with emergent binding pockets developed during the past decade with an emphasis on the cavity-enabled functions such as catalysis in host-guest systems and porous extended materials. We focus on some of our own research, while also highlighting the representative examples from other research laboratories.

Pictured below – Wenqi (Vince) Liu alongside the Graphical Abstract for his review in Chem: 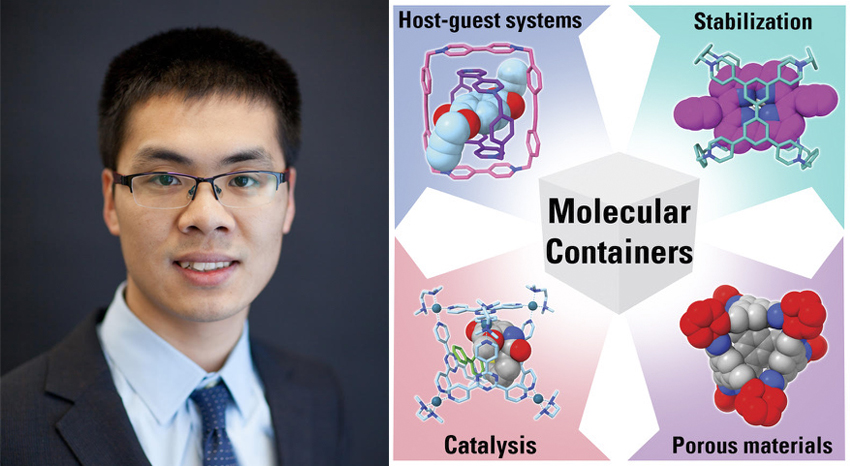