Polyrotaxanes with well-defined numbers of threaded rings, which have already been reported in the June 12th Issue of Science this summer (Science 2020, 368, 1247–1253), have been picked by the Editors at C&EN to be among the coolest molecules that were reported in the chemical literature in 2020. C&EN’s Editors commented in relation to the polyrotaxanes “Chemists at Northwestern University designed a molecular machine that uses redox chemistry to thread rings two at a time onto a polymer chain (Science 2020, 368, 1247–1253). The scientists would like to use this system to build polyrotaxanes for information storage by encoding data in the sequence of rings.”

In addition, former group member Professor David Leigh’s symmetrical trefoil knots and asymmetrical three-twist knots (Nature 2020, 584, 562–568) are also gracing the list. C&EN Editors commented in reference to this spectacular advance in the field of molecular nanotopology “Researchers at the University of Manchester used metal ions to tie molecular strings into two types of knots. Adding lutetium ions alone or in combination with copper ions leads to symmetrical trefoil knots or asymmetrical three-twist knots, respectively.” Kudos to the entire team behind the production of the precise polyrotaxane synthesizer and also to David Leigh and his research group across the Pond at the University of Manchester.

Pictured below – Polyrotaxane with well-defined numbers of threaded rings selected as one of C&EN’s Molecules of the Year for 2020: 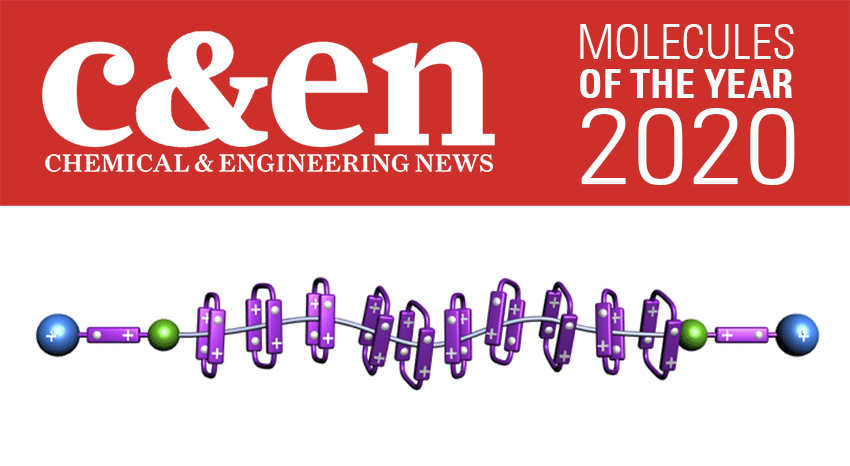