Postdoctoral Fellow Liang Feng has been selected as the winner of the 2020 Foresight Institute Distinguished Student Award! This award recognizes the graduate student whose work is considered most notable in advancing the development and understanding of nanotechnology. Liang’s groundbreaking research on the synthesis and applications of framework materials with hierarchical nanoporosities, architectures, and compositions stirred up much excitement among the award judges, according to the President of Foresight Institute, Allison Duettmann. Liang has developed several general synthetic strategies during his graduate studies in Professor Hong-Cai Zhou’s group at Texas A&M University, including linker thermolysis, reinstallation and migration, modular synthesis, and programming, in a quest to engineer hierarchical nanoporosity, distribution and composition in multicomponent metal-organic frameworks (MOFs).

Liang joins two previous winners – Jonathan Barnes in 2013 and Chuyang Cheng in 2015 – of the award from the Stoddart group.

Liang will present his award-winning research at Foresight Institute’s virtual Annual Member Gathering on 12 December 2020. During this celebration, he will be introduced to the Foresight Community, as well as the Molecular Machines Group, and will become involved in monthly meetings with scientists to advance progress on atomically precise applications in energy, agriculture, materials science, and spur long-term progress toward the design and synthesis of molecular machines. Well done Liang!  Many congratulations!

Pictured below – Liang Feng alongside the Foresight Institute Logo: 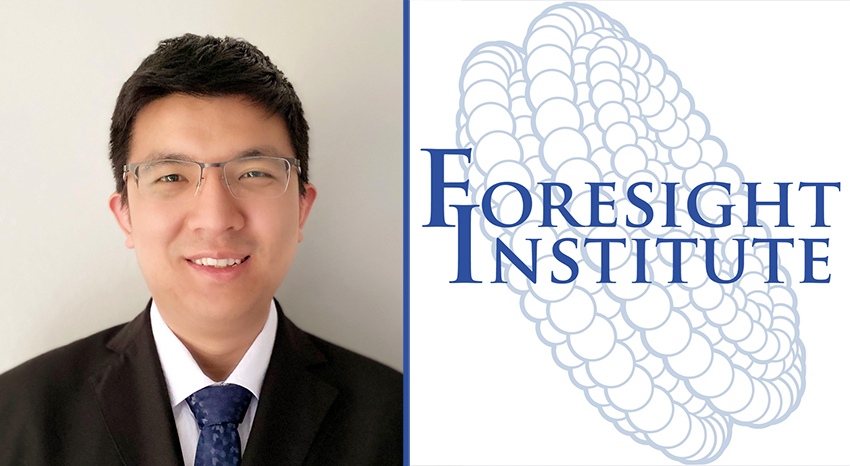